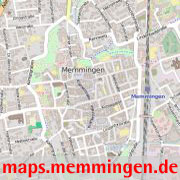 Memmingen’s town centre as a lot to offer: The historic old streets and impressive buildings from its long imperial history form an ideal setting for shopping with flair. Kramerstrasse, Memmingen’s almost 400 meter long pedestrian zone winds its way through the town centre from north to south. For its size, Memmingen has an exceptionally large historic part. There are specialist shops, boutiques, department stores and cafes from Marktplatz to Weinmarkt and from Theaterplatz to Schrannenplatz. Memmingen’s retailers and chain stores offer interested buyers in the town centre a wide and varied range of goods.

The pedestrian zone is currently undergoing major changes. Kalchstrasse and Maximlianstrasse another shopping streets rich in tradition, have already been redesigned. Paved surfaces, traffic calming and floral decorations have breathed new life into the streets.

Maximilianstrasse, formerly the town’s shopping area, has again become a pleasant place to spend time. Broader pavements with low curbs invite visitors to take a stroll. Traffic has been reduced, as have traffic speeds which ensure that the town centre continues to be easily accessible by car. The locating of the Reischmann Company with its 6200 square metres of wide-ranging fashion and sports goods has created a magnet. More shops, cafes and restaurants have since moved there including a large specialist sports store in the Maxx Forum at the eastern end of the street towards the railway station. Empty shop windows are a thing of the past here. Even Schmiedeplatz and Salzstrasse, a cross-road to Maximilianstrasse are hardly recognisable. Light-coloured paving stones instead of dark asphalt shape the street. Thus, upgrading work in the area between Maxilimilian Strasse and Kalchstrasse is in full swing.

The same goes for the centrally located Weinmarkt. Traffic has been reduced and new possibilities have been created for the use of open spaces. The street is shaped by outdoor tables in front of the surrounding cafes. The people of Memmingen promenade here when the weather is fine. The impressive ensemble of buildings which include the Kramerzunft, where history was written, is now the focal point. A “Twelve Peasant Articles” fountain will indicate this highlight of European history.

At the same time, the area and the old part of town remain accessible due to the fact that reduced-speed traffic is allowed.

Much has been achieved but plans continue

The next step in upgrading the town was Schrannenplatz and the Elsbethen area. The “Neue Schranne” residential and office building with 2500 square metres of retail surface has been created between Theaterplatz and Schrannenplatz. The main tenant is the C&A “clothes store for the entire family” with its 1600 square metres of sales area on two floors. The town contributed to the 38-million-euro construction project by financing new theatre workshops for the Regional Swabian Theatre which is resident in Memmingen. Schrannenplatz was given a new face too in the shape of the further attraction of a water feature “trace of the town stream” along with the famous Fisher Fountain. The trace of the town stream indicates the course of the town stream which flows through the square. Thus, major changes have been made to a prominent place in the old part of Memmingen. Countless other residents have grabbed the opportunity and have participated by upgrading their own buildings. More construction projects are in the planning stages or are already being carried out in the southern region of the town around Schrannenplatz. These projects will help to upgrade the southern old part of town and improve the quality of dwelling and shopping and create a pleasant atmosphere.

It can be safely said that Memmingen is currently in the process of advancing in a far-reaching way and will secure a solid reputation as a major central shopping town. Up to now, great success has been achieved in the area of urban redevelopment and in recent years roughly 85 million euros have been invested, followed by roughly 255 million euros of follow-up investments in maintaining the attractive old part of the town. Considerable expense has gone into renovating and maintaining historical architecture in a sustained way.  Together with the MEWO Art Gallery “Old Post Office”, the Kreuzherrn monastery with its impressive baroque stucco ceiling, which was renovated at the expense of 9.1 million euros and is now used as used as the municipal music and singing school, function hall and café, is the latest example in this long list which ranges from Antonierhaus to the award-winning Zangmeisterpassage.

Vitality and life in a historic setting – that is what still draws the residents of Memmingen and their guests into the town centre despite the wide range of shopping opportunities in out-of-town retail parks.

In order to support the town centre and the retail outlets located there, the town has created four multi-storey car parks with approx. 1400 parking spaces on the edge of the old part of town. These car parks are directly adjacent to the ring road around the old part of town. A uniform hourly rate of 50 cents creates transparency and is kind to your wallet before you go shopping. The motorist is guided to the nearest open car park by an electronic parking guidance system without detours. The Karstadt Company’s car park with 265 more parking spaces is additionally linked to the parking guidance system. Furthermore, the new privately-run “Neue Schranne” underground car park in Schrannenplatz has 105 parking spaces.

However, the town centre is also easy to reach by public transport. The municipal bus routes run centrally though Weinmarkt. Memmingen railway station and the central bus station (ZOB) are directly located on the edge of the old part of town. The town centre can also be reached easily on foot from here.

Data and facts about urban retailing

Retail surface in the town of Memmingen comprises approx. 176,000 square metres, which with 40,984 residents (status: 31.12.2011) means there is 4.3 square metres of retail space per head. This figure is far above the national average of 1.3 square metres per resident, but is slightly misleading, since it refers only to the residents of Memmingen and not to the high number of people living in the surrounding area.

Memmingen’s core catchment area consists of roughly 50,600 people, that is almost 10,000 more people than the number of inhabitants indicates. The reason for this is that some of the communities directly adjacent to the Memmingen do not belong to the town. The extended catchment area amounts to roughly 89,000 residents, whereas the long-range catchment area comprises 261,000 residents.

The high significance of the areas surrounding Memmingen’s retail is reflected in the retail centrality index (surrounding areas / purchase power ratio) of 191. In the domain of clothing, this index is even 268 which corresponds particularly to a purchase power inflow of 33.7 million euros. According to the latest basic GfK market research figure (2010) the turnover per resident is 185 and is therefore well above the average for the Federal Republic of Germany. The figure for purchase power per resident of 102.9 is also above the national average. According to GfK, total purchase power amounts to 832 million euros and Memmingen’s retail turnover amounts to 378 million euros.

With an area of what is now over 50,000 square meters, the town centre has almost a third of the retail area. The Karstadt company with over 8000 square meters and the Reischmann company with 6200 square metres have the largest retail areas. Only 12% of the retail area in the town centre, mainly Kramerstrasse (pedestrian zone) as well as parts of Kalchstrasse and Maximilianstrasse are currently classified as “A” locations.  The daily frequency of visitors has been measured as up to 11,000 visitors. The upgrading of Maximilian Strasse has already led to a further increase in this frequency. After the construction work is finished, large parts of Maximilian Strasse could develop into “A” locations.

The industrial area in the north of the town, where large retail markets have established themselves, have approx. 55,000 square metres of retail area.


On the first Sunday of the Memmingen fair, shops in Memmingen town centre are traditionally open from 1 – 6 pm.

Links to the topic:

Did you know that Memmingen ...