Every year on the penultimate Thursday before the (Bavarian) summer holidays, the Children's Festival takes place in Memmingen, and then the following Saturday is the Fisher Day. Every 4 years (next time in 2020), Wallenstein summer takes place.

The “Memmingen in Bloom” festival in May (the Saturday before Mothering Sunday) and the “Town Festival” in June have also now become traditions.

Stalls, stands and rides are set up at the Memminger Fair in October.

The Christmas market is opened by torchlight by the mayor and the “Christ child” in time for the first Sunday of Advent.

The Children’s Festival is based on a 440-year-old tradition in which it was the custom for school children to go for a walk in spring. During this walk, the three best girl and boy pupils were chosen to be queens and kings.

Nowadays, all participating children from Memmingen’s infant and junior schools are given presents. At the end of the successful academic year, there is a church service for everyone, followed by singing and dancing in the market square.

In the afternoon, the children form a fanciful procession and walk to the playing field in the stadium grounds.

The decorated pole that the children carry with them originates from decorated rods and royal regalia of sceptre and crown. This is actually the symbol of the Children’s Festival.

History of the Children’s Festival

The history of the Children’s Festival is closely associated with the town of Memmingen’s academic history. As in the case of similar festivals in other towns, its mediaeval origins are largely in the dark but probably lie in the school classes going for a springtime walk during which the best pupils were commended.

The first mention of the festival was in the year 1571; more detailed information on the course of the festival is given in the “Order of the queens in the girls’ schools” dated 2 June 1587. The course of events described or specified in this document contains elements, some of which have been either maintained or slightly modified, that characterise today’s Children’s Festival. After the spring examinations “in religion and all other subjects, order and discipline, obedience and writing, all the girls went to church in the morning and at noon, after which they had lunch at the schoolmaster’s home. The girls were allowed to bring “two sausages, two slices of white bread, two eggs and a small coin. After that, the round dance was held during which particular attention was paid to the correct procedure and suitable attire.”

The best girl pupils were given a reward, crowned queens and were dressed in festive clothes. After the round dance had finished, the parents of the queens used to invite their schoolmasters, their wives and the queens for a meal. A walk finally took place a few days later. Due to the fact that the tradition was abused many times, the best boy and girl pupils were crowned for the last time in 1789.

After media presence started in the imperial town in 1802, the program of events of the Children’s Festival remained almost unchanged. The children sung songs together in the market square – before and after the celebratory church services – followed in the afternoon by the school children’s procession accompanied by music from the school years, later from Hallhof to the Reichshain. Here, different games were played under the teachers’ supervision. During the Second World War, the Children’s Festival was cancelled due to the scarcity of staffing, but also because of the shortage of food, sweets and clothing.

As early as centuries ago, a small stream from nearby Benninger Ried was channelled through the existing settlement of “Mammingin” for irrigation and drainage purposes. Once a year this calmly flowing stretch of water had to be drained off and cleaned. Before the cleaning process, it was at that time necessary to catch the trout. This task was carried out once a year in turn by workers from the different guilds of craftsmen. Nowadays, Memmingen’s stream (Stadtbach) fishers jump into the stream on Fisher Day and … if they are lucky might even become Fisher King!

On the Friday evening, the bailiff, accompanied by the more fearless men of the Town Guard, announces the council decision to hold Fisher Day the next day. And when the guards and bailiff finish their day’s work by visiting one of the cosy wine bars in anticipation of the morning to come, the night watchmen patrol parade through the old part of the town singing the hour.

After the procession of all the old and young fishers on Saturday morning at 7.15 am, followed by a traditional fisher maxim read out by the head fisher on Schrannenplatz, a canon sounding at precisely 8 am marks the start of fervent fishing; the lucky man who manages to catch the heaviest and consequently the so-called “King Trout” in his net is crowned king the same morning and is celebrated by cheering crowds. His predecessor is given a hearty snack by way of consolation and is booted from the throne by an equally hearty kick.

The Memminger Ach comes from Benniger Ried and flows through the former imperial town of Memmingen. The water which is channelled was used for hundreds of years to drive mill wheels, the trades of dyers, bakers, brewers of beer, bathers and launderers (whose water consumption was often high) as well as smiths and common citizens (means of cooling). Since the water from the town stream carried all sorts of floating refuse and also carried away waste water from the town, cleaning the bed of the stream regularly was absolutely necessary. For this purpose, the water was drained out, which meant that it was also possible to repair damaged spots on bridges and mill equipment.

There is written evidence dating from the 16th century about the customs and about why it was necessary to catch all the fish in the town stream and directly before it is cleaned. Since the late 19th century, they form the core of the Fisher Festival / Fisher Day. Joyful processions and convivial balls delighted the people of Memmingen who, as a community, owned the right to fish in the stream. Following the strong aim to create “something permanent”, Fisher Day in 1900 was organised by a municipal committee in a special way. Historical leitmotifs accompany the procession and are the focal point of a festival. Since those days, Fisher Day organised by a specially founded society – is the major annual traditional festival in Memmingen.

Throughout the centuries, the essential elements of Fisher Day have remained more or less unchanged; more elements have been added since 1950: 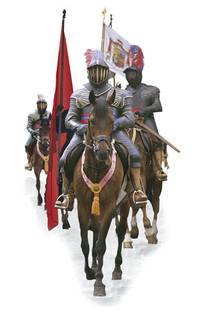 Memories of Wallenstein’s stay in Memmingen in 1630 originate from retrospective looks at particular events in town history in the Fisher Day processions: During the major Fisher Days in 1925 and 1930, “Wallenstein’s entry into the imperial town” along with other historical themes was organised and staged by F.W. Göppel. During the preparation for the major Fisher Day in 1980, a new concept development of the procession was introduced. While the aim was to offer the people of Memmingen the opportunity to become involved on a voluntary basis in diverse ways which would consequently strengthen a sense of community, cheerfulness, awareness of history and personal initiative, the content and course of the major Fisher Day was switched to the theme of Wallenstein.

This theme is particularly suited to a festival that takes place on the squares and in the entrenchments of Memmingen’s old town. Material for creating, the festival, procession and theatrical productions is obtained from chronicles, above all those of Sebastian Dochtermann. The performance is based on a short period during the 30-year war, which many contemporaries considered to be a reprieve: “because while the duke was in town, everything was pleasant and safe” (Dochtermann Chronicles). Right from the beginning, great importance has been attached to original historical details and to outfitting everyone concerned (costumes, tools, weapons) as perfectly and with as much attention to detail as possible. Largely due to the fact the Fisher Day Society, the town, local business and a large number of citizens have cooperated in a very fruitful way, it has been possible to produce approx. 1500 weapons and 4000 costumes based on historical examples. Roughly 3000 citizens of Memmingen take part in the festival in very diverse groups.

The Wallenstein summer has been organised several times since 1980: 1983, 1987 and 1992 and since then at regular 4-year intervals. The theatrical performances last for a week, beginning on the Sunday after Fisher Day. The course of events and focal points take inspiration from the concept development by the main organiser of many years and head fisher, Hermann Pfeif

Markets are an important ingredient of municipal life; the right to hold markets therefore frequently appears at the beginning of urban development and wealth and riches are based on this. The Guelphic-Stauffer settlement of Memmingen, situated on a commercial crossroads received confirmation from King Rudolf of Habsburg in 1286 that it had the right to hold a market every week on Tuesday. Saturday was added as a market day in the 16th century. More markets for wood, wine, fish, cabbage, wool, horses, cattle, poultry and cereal shaped the image of the town over the centuries and even today these markets are reflected in some of the place names.

St. Gallus’ Day (October) since the middle of the 18th century in Weinmarkt and was later extended to Rossmarkt, Schweizerberg, Westertorplatz and into Maximilianstrasse. A fairground was added around 1900 at the latest and its rides and stalls on St. Josefskirchplatz, Königsgraben and Kaisergraben as well as at Westertorplatz still delight visitors.

A Christmas market has taken place in Memmingen for 50 years. It was originally brought into being in order to give Memmingen’s travelling entertainers the opportunity to earn money in the cold season too. The Christmas market used to be held in Hallhof, but since the market square was turned into a traffic-free zone, the market has found its home there.

The Christmas market is opened by torchlight by the mayor and the “Christ child” in time for the first Sunday of Advent. Christmassy goods are sold on about 30 stalls set against the backdrop of the town hall, guild house, tax house and beautiful town houses until a few days before Christmas. There is also plenty to eat and drink on the many stalls which are adorned with Christmas decorations. Visitors are also entertained by choirs and brass bands and for young visitors there is a clown , St. Nicolas distributes presents at the weekends and the “Christ child” tells fairy tales on Saturday afternoon. Another special feature is the Memmingen heavenly grotto - a heated tent in which the Advent season is reflected on sometimes in a humorous way and which also offers a place of retreat for contemplation.